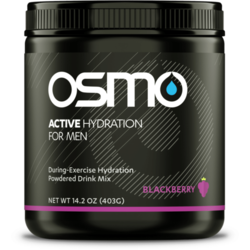 Osmo Nutrition Active Hydration for Men - 2018
$20.00
Hydration is power. Osmo Active Hydration is a during-exercise hydration drink that was developed to be the fastest way to rehydrate. Based on peer-reviewed science, the formula contains an optimized ratio of natural and functional ingredients like sucrose, glucose, and electrolytes and is flavored with real fruit to: - Increase power output - Improve endurance - Avoid cramping To maximize and sustain power, stay hydrated. As body-water drops, so does aerobic power; by the time you’re thirsty you’re already about 2% below optimal body water, which can result in an 11% reduction in power output. Individual body-water loss varies among athletes and according to exercise intensity and weather conditions. Most people, under most conditions, should drink 20-25 ounces of Osmo Active Hydration per hour of exercise (roughly one small or large water bottle). Lighter athletes or athletes exercising in cool weather conditions may only require 16-18 ounces an hour. Larger athletes or athletes exercising under hot and humid conditions may require up to 30 ounces an hour. As endurance athletes, our bodies produce power through aerobic metabolism. Aerobic metabolism requires oxygen-rich blood to flow to the muscles. As body-water drops (due to perspiration and respiration), blood “thickens”, which reduces heart-stroke volume. This means that if you don’t start your effort hydrated, you won’t be performing at your best. If you don’t replace body water rapidly during your workout, your heart rate can hold steady (or even rise), but power will drop (known as “Cardiac Drift”). In many cases, an athlete’s rate of fluid loss is greater than their body’s ability to replace it orally. What this all means is 1) you should start your workout fully hydrated, 2) you can’t wait until you’re thirsty before you start drinking, and 3) you should be drinking Osmo Active Hydration, because it’s been developed to be the fastest way to replace body-water orally. How is Osmo so fast at replacing body-water? To answer this question, we want to tell you about an American Chemist named Dr. Robert K. Crane. In 1960, Crane presented his discovery of the sodium-glucose cotransport system. Later, The Lancet called Crane’s discovery “…the most important medical advance this century.” In plain language, when glucose and sodium are present in the small intestine, water is drawn into the bloodstream at a much faster rate. Crane’s discovery of cotransport led directly to the development of oral rehydration therapy. Oral rehydration therapy has saved the lives of millions of people suffering from dehydration in underdeveloped countries since the 1980s. Crane’s scientific cotransport discovery paved the way for Osmo Active Hydration. We have studied, tested and perfected the science of oral rehydration, honing the ratio of sodium (and other electrolytes), glucose and the other natural and organic ingredients to maximize the rate of fluid absorption and palatability.
Page 1 of 1